When it comes to psoriasis triggers, medical professionals have identified that there’s a deep link between psoriasis and alcohol, but also psoriasis stress. According to the latest medical findings it seems that a series of external factors can make psoriasis worse in those who already have it. However, for people who don’t really know too much about it, what is psoriasis?

Psoriasis is characterized as being a scaly and dry skin disorder which is caused by the immune system being triggered by mistake and result in an overproduction of skin cells. Usually, the production of new skin cells takes anywhere between twenty one and twenty eight days, but for those who are suffering from psoriasis, this process is shortened to around two to six days. [note]On a global level, psoriasis affects around 3 percent of individuals and it generally develops in patients aged between eleven and forty years old. [/note]Regardless of the fact that psoriasis is not contagious, sufferers have to deal with harsh social behavior, discrimination and exclusion.

The cause of psoriasis still eludes doctors and even until this day it is a big mystery. But there’s a good chance that a big part of the story is the interplay between triggers and genes. According to medical professionals, psoriasis can be triggered when something will meddle with the person’s immune system, while when it comes to psoriatic arthritis (a type of psoriasis that will affect the individual’s joints) both environmental factors and genes play a role in its development.

The Role of Genes

One in ten people have genes that expose them to the danger of suffering from psoriasis sooner or later in life, yet the fact is that many individuals who suffer from it don’t report having relatives with the disease. One thing is for sure though: there are certain genes that are triggered which will eventually cause people to suffer from psoriasis, but these genetic connections are not yet known. Medical specialists say that this is not a simple genetic program like blue or green eyes, where it basically passes through a family in a certain pattern. On top of that, this is also not a disease which could be categorized as being strictly genetic. It’s more like a tendency towards disease, probably brought on by an assortment of genetic changes. For instance, errors in DNA chemicals may cause misplaced, misshapen or missing proteins. People who develop psoriasis have a specific combination of genes that leads to them suffering from it and currently researchers in the medical field are still working in order to determine these genes. [note]After they’ll manage to do so, they’ll gain an even better understanding of psoriasis and it’s then that a cure may be on its way. [/note]What is strange though is that a large part of the population has these genes, genes which make them predisposed to psoriasis, but eventually around two to three percent of them will develop it. Given that, the only conclusion one can reach is that in the absence of certain triggers, psoriasis will not appear. 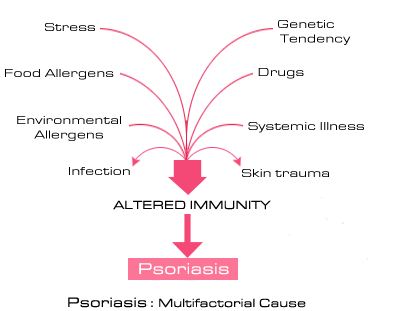 Doctors have been able to identify the main psoriasis triggers which will cause someone who suffers from the uncomfortable skin disease to feel even worse. While it’s very well known that the disease’s underlying cause stems from the immune system, there are certain triggers that can cause flare-ups or make symptoms worse. Some of them will be included below:

Many are the cases in which people will experience a flare-up or develop psoriasis for the very first time after taking certain drugs. Some of them include:

For those who have a family history of psoriasis or suffer from it themselves, it’s recommended to inform their doctor about these medications just to make sure he knows about all of them and prescribe alternatives. In some cases, reports from patients said that infections like a simple strep throat may be responsible for making the disease worse.

This has been particularly linked to younger people and they have a higher chance of worsening their psoriasis symptoms if they suffer from an infection like this. [note]The good news is that as soon as they start treating the infection, the psoriasis symptoms will subside. [/note]There are many other triggers which have been linked to psoriasis and they include the heavy use of alcohol, smoking, diet and allergies. 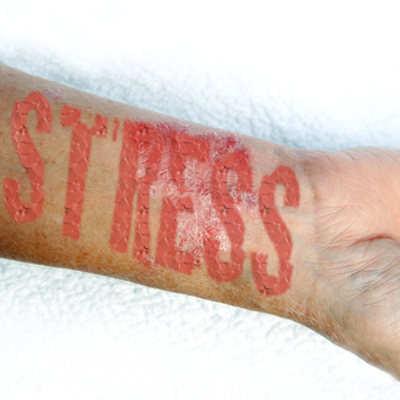 Recent studies have shown a clear link between psoriasis and stress and while stress is very well known for causing a worsening of the psoriasis symptoms, the disease itself can make people feel even more stressed. So how are psoriasis and stress actually linked? The truth is that experts are not completely sure yet. They believe that it may have to do with an effect on the immune system. This is because many individuals usually experience their first psoriasis flare-up during stressful times.

What are the aspects of psoriasis which generate stress? 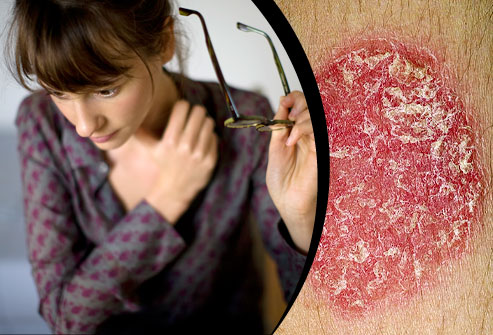 Infections can cause psoriasis

Certain studies have shown that different types of infections are linked with psoriasis. Many dermatologists have confirmed to have had and still have patients with strep throat developing their first psoriasis lesions in just 14 days. On top of that, it seems that thrush infections can aggravate inverse psoriasis while a strep throat will generally precede an outbreak of guttate psoriasis. To number some of the infections which are responsible for triggering psoriasis, they are: 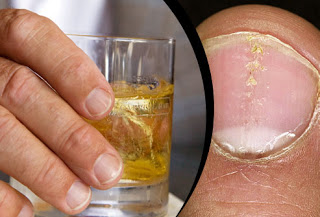 The psoriasis and alcohol link has been determined by specialists quite a long time ago and there is extensive evidence that proves the fact that people who consume alcohol will likely make their psoriasis symptoms worse. The type of alcoholic beverage and the amount of alcohol consumed have both been shown to increase the risk for the exacerbation of plaque psoriasis or its development. A recent study following 82,870 women over an extended period of fourteen years demonstrate that consuming more than 2,3 alcoholic beverages a week was a major risk factor for new onset of psoriasis.

According to data from the same study, women who chose to consume non-light beer exposed themselves to the risk of developing psoriasis. [note]When it comes to men, consuming alcohol in higher than recommended doses (at levels higher than one hundred grams per day) seems to be a great risk factor for the development and increased activity of the disease.[/note]

Patients who’ve chosen to indulge themselves to alcohol while suffering from psoriasis have shown a decreased treatment response. What was interesting in the findings of the study was that heavy drinkers had a cutaneous distribution of psoriasis that had a tendency to be mostly acral, involving the dorsum of the digits and hands; the strange thing was that the distribution resembled the one seen in patients suffering from HIV.

However, doctors are yet to crack down on the exact molecular mechanisms by which the consumption of alcohol exacerbates or triggers psoriasis. [note]One of the theories medical specialists have come up with is the fact that consuming alcohol may increase the production of cell cycle activators and cytokines, which could eventually lead to epidermal hyper proliferation. [/note]Even more, the higher susceptibility to minor infections which was generally observed in alcoholics, like those caused by trauma and streptococcus, has also been suggested to be linked with the development of psoriasis.

Although genetics and the environment may not be amenable to alteration and prevention, those who suffer from an out of control alcohol consumption can slowly, but surely get in control of their life again through appropriate pharmaceutical interventions and counseling. Because of that, those who suffer from psoriasis will be able to eventually alleviate their symptoms and improve their quality of life.

Psoriasis can be mild or it can be extreme and that is when most people will start complaining about the fact that it affects their personal life to a level they cannot cope with anymore. In such cases, it’s recommended that individuals seek alleviation not only through drugs, but also therapy and counseling sessions. [note]Given the fact that they are subjected to social stigma on a daily basis and also to the stress of coping with the disease, it can be quite easy for a psoriasis patient to suffer from depression, have anxiety attacks and even suicidal thoughts. [/note]With the advent of more potent drugs and modern therapies, such people can finally lead a more normal life without having to worry feel shackled by their skin disorder.

Psoriasis is a skin disease that is characterized with the growth and multiplication of skin cells which leads to red and white patches on the body, which is why sufferers… Read More
Info

In order to avoid the cost of doctor visits and prescription medications, many people are opting to use psoriasis natural treatment for their skin condition instead. Natural products that can… Read More
Info

Most people who suffer from psoriasis feel as though they are alone in their battle for comfort or relief from their symptoms. However, this is not true. Very few people… Read More