When using phototherapy for psoriasis treatment, one has to ensure that it is recommended by a doctor. Phototherapy is the use of ultraviolet light (UV) to slow down the growth of skin cells. This is used to treat psoriasis which causes the skin cells to grow too quickly.

There are two types of ultraviolet light therapy being used in the treatment of psoriasis:

UVB is more effective in treating psoriasis than UVA. Exposure times begin with 30-60 second sessions which are then gradually increased until the light causes the skin to turn red in color. When the skin no longer turns red, the exposure time is increased until it does. Treatments are done daily or several times each week and the light is used alone or with anthralin (ingram regimen) or tar products (Goeckerman treatment).

UVA isn’t as effective as UVB but it penetrates deeper. Treatment with UVA usually takes about 20 minutes each session and the UVA light is used together with psolaren drugs known as PUVA. With the use of PUVA, treatment time is greatly reduced from the 20 minutes to about 2 minutes.

Phototherapy can be used alone or with a combination of medicines. To treat severe cases of psoriasis, UVB is used alone.

Generally when medication is to be used with the light therapy, you will first have to take the medication before the therapy. You may apply it on the skin, take it orally or use it as bath salts. You will then go to the booth for your session. The use of two types of treatment is known as combination therapy.

The three common forms of combination therapy are:

The body is exposed to UV light from light tubes that give of either UVA or UVB light depending on the type of treatment. The booths used for treatment come in different designs. Some look similar to phone booths and you can stand in them while others look like tanning beds where you lie down during treatment. [note]The booth records the amount of UV light you are exposed to.[/note]

Generally, the entire body is exposed to the light and if the psoriasis only affects certain areas of the body then the light can be directed to those areas. You will be given goggles to protect your eyes from cataracts and men also need to wear genital shields to protect themselves from an increased risk of genital cancer.

Another phototherapy option involves the use of narrow-band UVB light. The patient is exposed to only the light wavelengths that work when treating psoriasis. Older forms of treatment exposed patients to both the useful and not so useful light rays.

What to expect after treatment

After undergoing phototherapy for psoriasis treatment and you skin begins to recover, it should be checked at least once or twice a year for any signs of further damage or skin cancer. 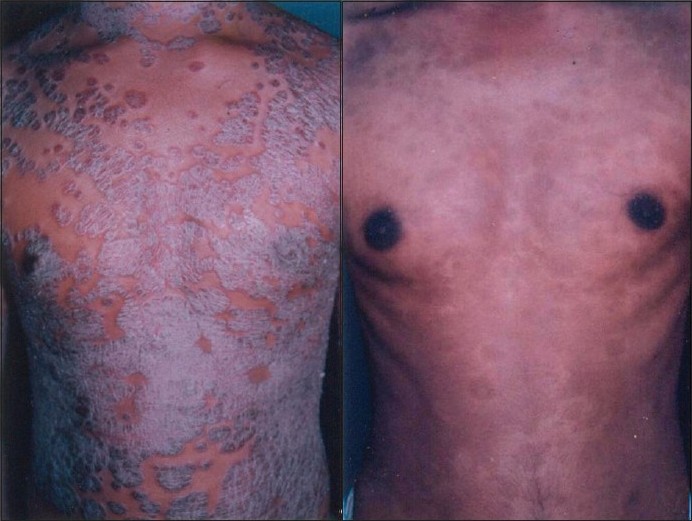 Why is the phototherapy done?

How well does it work?

Phototherapy is usually very effective in the treatment of psoriasis and partial to full skin clearing occurs after an average of 20 sessions at the clinic. With more severe forms of psoriasis, more sessions may be required to achieve the desired results. Home UV equipment is more convenient but6 less powerful that equipment found at home. [note]With the use of home equipment, it may take up to 60 sessions to see meaningful results. [/note]The doses of UVB which should be high enough to cause the skin to turn red are used with petroleum jelly and other moisturizers to clear psoriasis plaque.

When using UVA alone, the treatments may yield results but they will take longer to clear the psoriasis. UVA is effective when used together with a psolaren (photosensitizing drug). This combination treatment is also known as PUVA.

The risks associated with phototherapy include:

You should also note that UVA produces milder and fewer short term side effects than UVB does.

Things to think about

Phototherapy is effective but it also requires a lot of time for the treatment to really sink in. The expenses incurred in UV treatment are also quite high. Commercial tanning beds are available but most of the emit UVA which is less effective in psoriasis treatment than UVB beds. Not everyone has the ability to buy these units which makes them a preserve of a few. For people who are affected by pustular psoriasis or erythroderma, the treatment may only make the condition worse.

For information on where you can buy the recommended home light therapy equipment, you can go to The National Psoriasis Foundation.

You should be careful when treating yourself from home and it is best done under a doctor’s supervision.

The phototherapy for psoriasis can yield some very impressive results if done well so it’s best to stick to what the doctor says. Exposing yourself to more UV light than recommended won’t help to heal you faster.

Is homeopathy for psoriasis effective?

How can psoriasis treatment in homeopathy be of help to you? When dealing with psoriasis, the body’s immunity needs to be strengthened from within and should be able to identify… Read More
Drugs

Dermalex Psoriasis is a common and safe psoriasis treatment option. Psoriasis is a recurring skin condition that affects lots of people. It generally attacks men and women between the age… Read More
Drugs

Vitamins for psoriasis may not be something that you would find yourself familiar with. Apparently, more attention is being paid to vitamin D and how the deficiently of it can… Read More