Photos of all types of psoriasis

Select the type of psoriasis for viewing photos: 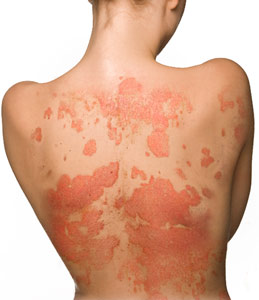 It is the most common type of psoriasis and is sometimes known as psoriasis vulgaris. It causes inflamed, red and raised skin that is covered by silvery white scales which may burn or itch and can appear anywhere on the body but is most common on the elbows, scalp, knees and lower back.

It appears as smooth, bright-red shiny lesions and it doesn’t have scales. It usually appears in the armpits, groin, under the breasts and in skin folds around the buttocks and genitals. It may worsen because of its location from sweating and rubbing.

It often starts suddenly in childhood or as a young adult and occurs in less than 2% of psoriasis cases. It causes small pink-red spots to appear on the skin and usually appears in the upper arms, scalp, thighs and trunk.

It causes pus filled bumps surrounded by red skin. Reddening appears first then scaling and finally the formation of pustules. It may appear in one area of the body or cover most of the body when it is generalized. 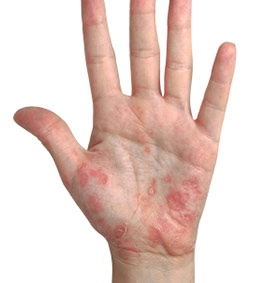 It affects up to half of all those affected by psoriasis and is even more common among those who have psoriatic arthritis. With nail psoriasis, you are even more likely

to also have a fungal infection.

This is the least common form of psoriasis but it is also very serious. It affects most of the body and if you happen to have erythrodermic psoriasis symptoms you should see a doctor immediately as it can be life threatening.

This is where a person has both arthritis and psoriasis. The most common joint are: warm joints that sometimes become discolored, stiff and painful joints, sausage swelling of the toes and fingers.